I recently wrapped up a lengthy series on the battle over the rights to Superman. You can find the first part of the series here. Now, it only makes sense to follow it up by discussing some other high-profile cases involving the ownership of comic book characters. First up, we are going to take a look at Joe Simon’s efforts to reclaim ownership of Captain America.
In 1940, Timely Comics, the predecessor of Marvel Comics, published the first issue of Captain America Comics debuting the titular character.[1] Simon and Jack Kirby were the attributed authors of the book.[2]  Simon would continue working on the comic through the tenth issue.[3]
According to Simon, and recounted by the Court, he “sold the Captain America stories to Timely for a fixed page rate plus a twenty-five percent share of the profits of the comic books.”[4] He also maintained he worked on the first 10 issues as a freelancer. There was no written contract between the parties, but Simon acknowledged he orally assigned to Timely his rights to Captain America.[5]
In 1967, Simon filed a lawsuit in the Southern District of New York.[6] He sought the court to declare he had the sole right to the copyright renewal term under the Copyright Act of 1909.[7] A year prior, he also filed a claim in New York state court claiming Timely’s use of Captain America was unfair competition and misappropriation of his state law property.[8] After two years, the parties agreed to a settlement.[9] As part of the settlement, Simon acknowledged his contributions to the work were done as a work made for hire, and he assigned “‘any and all right, title and interest he may have or control or which he has had or controlled in [the Works] (without warranty that he has had or controlled any such right, title or interest)’” to Timely.[10]
As with Superman, the change in law brought about by the 1976 Copyright Act gave Simon another shot at reclaiming the rights to Captain America. The new law gave authors the ability to terminate a transfer of copyright after a set number of years had passed, and an additional provision of the law stated a termination “may be effected notwithstanding any agreement to the contrary, including an agreement to make a will or to make any future grant.”[11]
In December 1999, Simon filed termination notices with the Copyright Office.[12] He claimed he independently created Captain America and authored the first issue and he did so as “‘neither an employee for hire nor a creator of a work for hire.’”[13] Marvel filed a lawsuit seeking to have the termination notices invalidated and reaffirming Marvel as the owner of Captain America.[14] The district court found for Marvel based upon the settlement agreement signed in 1969, in which Simon acknowledged Captain America was a work made for hire.[15]
On appeal to the Second Circuit, the court found Simon was not prevented from litigating the issue of whether he created Captain America as a work for hire because of the previous settlement agreement. It also found that the prior settlement agreement retroactively acknowledging Captain America as a work made for hire is “an ‘agreement to the contrary’ under § 304(c)(5) of the 1976 Act.”[16]
The court’s decision paved the way for Simon to relitigate the issues surrounding the authorship and creation of Captain America at the district.[17] The case settled in 2003 with Simon once again assigning all of his rights to Captain America to Marvel.[18]
Simon’s battle with Marvel highlights two important things. First, using contracts with agreed upon and negotiated terms at the beginning of the relationship would have solved some of the problems. Second, creators should use the legal means available to them to make sure they are compensated adequately for their creations. Even though Simon did not reclaim ownership of Captain America, he was able to leverage his rights under the law to receive additional compensation for his creation.

I Wrote a Book

As the title of this post states, I wrote a book. More accurately, I've collected many of the posts from this site, expanded on them, and added new content to create my recently published book Comics Startup 101: Key Legal and Business Issues for Comic Book Creators. You can buy the book on Amazon as a paperback or as an ebook. You can click on either of the links below to purchase the book. (Note: affiliate links)

The book covers different business entities creators might want to establish, using contracts, contract negotiations, copyrights, trademarks, right of publicity, fan art, fair use, work made for hire agreements, and many more topics. I also use lawsuits and disputes from the comic book industry to highlight and explain these issues. There's a lot of useful information in this short, inexpensive book. I hope you'll grab a copy and give it a read. Even if you don't end up making comics, there is a lot of valuable information for anyone working as a freelancer in the media or arts world.
I'd also like to thank Douglas Paszkiewicz for providing the artwork for the cover. Look at this cover. It's excellent. 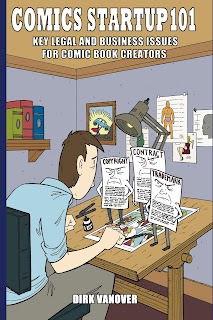 If you like the cover, first buy the book. Second, visit Douglas' website, ArsenicLullabies.com, to view more of his work.
Enjoy!
Posted by Dirk at 10:26 AM 2 comments: